The Donbas Blockade: Another Blow to the Minsk Peace Process 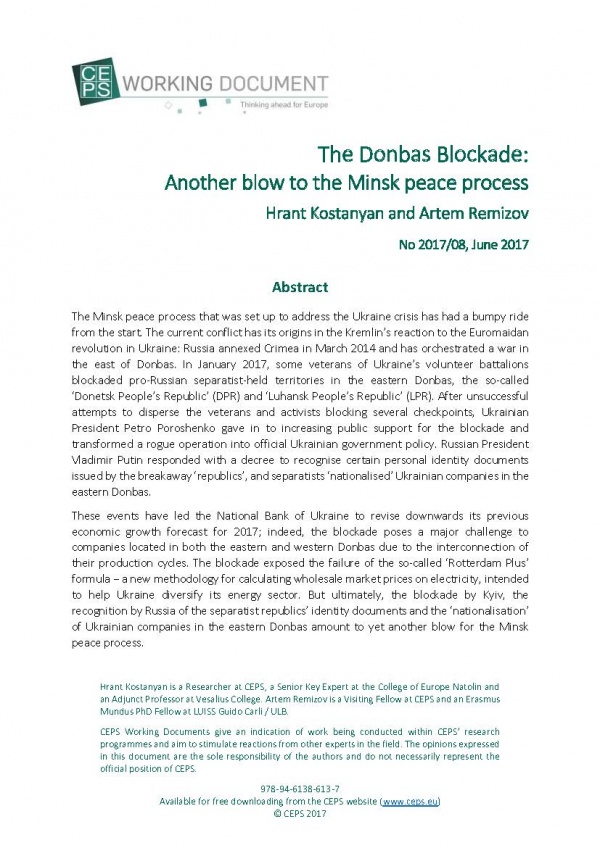 The Minsk peace process that was set up to address the Ukraine crisis has had a bumpy ride from the start. The current conflict has its origins in the Kremlin’s reaction to the Euromaidan revolution in Ukraine: Russia annexed Crimea in March 2014 and has orchestrated a war in the east of Donbas. In January 2017, some veterans of Ukraine’s volunteer battalions blockaded pro-Russian separatist-held territories in the eastern Donbas, the so-called ‘Donetsk People’s Republic’ (DPR) and ‘Luhansk People’s Republic’ (LPR). After unsuccessful attempts to disperse the veterans and activists blocking several checkpoints, Ukrainian President Petro Poroshenko gave in to increasing public support for the blockade and transformed a rogue operation into official Ukrainian government policy. Russian President Vladimir Putin responded with a decree to recognise certain personal identity documents issued by the breakaway ‘republics’, and separatists ‘nationalised’ Ukrainian companies in the eastern Donbas.

These events have led the National Bank of Ukraine to revise downwards its previous economic growth forecast for 2017; indeed, the blockade poses a major challenge to companies located in both the eastern and western Donbas due to the interconnection of their production cycles. The blockade exposed the failure of the so-called ‘Rotterdam Plus’ formula − a new methodology for calculating wholesale market prices on electricity, intended to help Ukraine diversify its energy sector. But ultimately, the blockade by Kyiv, the recognition by Russia of the separatist republics’ identity documents and the ‘nationalisation’ of Ukrainian companies in the eastern Donbas amount to yet another blow for the Minsk peace process.