The series offers an interdisciplinary platform for original peer-reviewed publications on the institutions, norms, and practices associated with Globalisation, Multilateralism, and the European Union. Each published volume delves into a given dynamic shaping either the global-regional nexus or the role of the EU therein. It offers original insights into globalization and its associated governance challenges; the changing forms of multilateral cooperation and the role of transnational networks; the impact of new global powers and the corollary multipolar order; the lessons born from comparative regionalism and interregional partnerships; as well as the distinctive instruments the EU mobilizes in its foreign policies and external relations.

PhD graduates are welcome to submit thesis manuscripts for publication as part of the GEM Book Series. For information about the submission and review process, they are invited to contact the GEM-STONES Project Management Office. 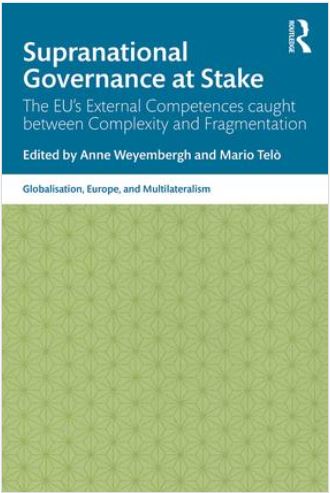 Available on 22nd of May 2020 here. Published by Routledge

This book examines the varied competences of the European Union (EU) in relation to its capacity to externalize its policy preferences. Specifically, it explores the continued resilience within the EU’s policy toolbox of supranational modes of governance beyond the State.

The book first situates European experiences of supranationality in relation to the wide variety of regional and global modes of governance it comes into contact with when seeking to deal with an increasingly complex and fragmented international environment.

“The Unintended Consequences of Interregionalism. Effects on Regional Actors, Societies and Structures”

Available on 17th of January 2021 here. Published by Routledge

This edited book brings a new analytical angle to the study of comparative regionalism by focussing on the unintended consequences of interregional relations.

The book satisfies the need to go beyond the consideration of the success or failure of international policies. It sheds light on complex interactions involving multiple actors, individual and institutional, driven by various representations, interests, and strategies, and which often result in unintended consequences that powerfully affect the socio-political context in which they unfold.

The central aim of the edited volume is to assess the EU’s and European actors’ networked capacity to contribute towards greater policy coherence on the international stage. The common and overarching question that it will seek to address is: How has increased regime complexity in the global order impacted on the ability of the EU and European actor networks to navigate, manage and influence debates and policy? Overall, the edited volume will explore if and how – in the face of increasing regime complexity across a range of regulatory, policy, and foreign and security issue areas – EU and European actor networks have facilitated effective action. To tackle this shared research focus, the edited volume's various contributions will mobilize network theories articulated at the global, intermediary, and actor-specific levels.

This edited volume assesses if, how, and to what extent, despite its limited military means and numerous political constraints, the EU has exercised a normative impact beyond its borders. It aims at assessing EU foreign policy from an IR and output perspective, both through empirical data and by measuring perceptions by competing actors of the effectiveness of EU external action. This means gauging EU foreign policy not only according to competing IR theories, or with regard to EU specific nature and constraints as an original foreign policy actor, but mostly in a comparative perspective. Researchers contributing to this volume mobilize process-tracing and interpretative evidence analysis to apply a set of constructivist assessments to the EU’s capacity to argue in favor of the appropriateness of specific policy options on the global stage.