Online Public Doctoral Defense of Guillaume Beaumier (University of Warwick/Université Laval)
"The evolution of privacy regulation: Between convergence and divergence in the transatlantic space."

The Zoom session can be reached: HERE

The evolution of privacy regulation: Between convergence and divergence in the transatlantic space

This thesis explores the evolution of privacy regulations in the transatlantic space since the adoption of the European Data Directive in 1995 up until the adoption of the General Data Protection Regulation in 2016. In doing so, it more specifically investigates how the rules governing the use of personal data by private companies in the United States and the European Union were formed through the interactions between public and private actors in both jurisdictions. Looking at the process of rule formation, previous works have traditionally viewed national regulatory systems as discrete units of analysis that could affect one another and yet always remained fundamentally distinct. The starting point of this thesis is different. It considers that each jurisdiction's regulatory process is continuously shaped by decisions taken in the other and that through their interactions they actually form a complex governance system that evolves based on two joint processes: exploitation and exploration. The former emphasizes that privacy regulators will generally tend to exploit the data protection rules of those with whom they previously had direct interactions. Meanwhile, the latter highlights that when preexisting rules prove to be insufficient, privacy regulators will explore new ones based on the very same interactions and relation to the broader system. The formation of data protection rules is thus always understood in relational or systemic terms, rather than an individual process. Based on a mix of content and network analysis, I further demonstrate that by exploiting preexisting rules private actors offered a new institutional avenue for public rules to cross national frontiers and promote greater regulatory convergence. At the same time, the multiplication of privacy regulations and data protection rules adopted by private actors created second-order information asymmetries, which in turn limited their interest in exploring new ideas and experimenting with new data protection rules. In addition to contributing to the literature on privacy and introducing a novel database on data protection rules adopted over the last 20 years in the transatlantic area, this thesis highlights how growing economic interdependence upends national regulatory processes and brings into question many of the assumed boundaries in the study of international political economy.

Guillaume Beaumier is a Marie Curie doctoral fellow currently completing a joint PhD program at the University of Warwick and Université Laval. His work mainly revolves around the growing complexity of global governance, international trade and the digital economy. His thesis specifically looks at the evolution of data protection rules in the European Union and the United States since 1995. Before starting his PhD studies, he obtained is master degree in international studies with honors from the University Laval. His master's essay has been  published as a scientific paper in the peer-reviewed journal Études Internationales. During his master, he also worked for the International criminal and humanitarian law clinic of the University Laval and won the prize for the best litigant of the thirtieth edition of the International law moot court competition Charles-Rousseau. In parallel to his studies, he worked as an external consultant for McKinsey & Co., a junior analyst for the trade section of the Canadian Embassy in Washington, a research assitant for multiple professors and a page at the National Assembly of Quebec. He finally studied a year at Abo Akademi in Finland during his bachelor studies. 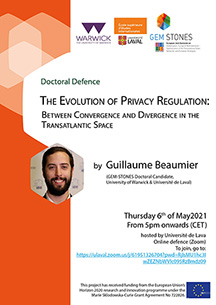